A while ago I stumbled upon a YouTube channel called Regular Car Reviews - almost certainly because they did a review of the Citroen 2cv - but then forgot about them again. It was my other half who re-shared that 2cv review with me… and this time I clicked some of the related links, and got sucked in.

Regular Car Reviews is… Amazing. Presenters “Mr Regular” and “Roman” are basically poets. They are able to wax lyrical about the most ordinary cars - because of course it’s not just a machine, cars are linked to ideas of social status, of identity, of freedom - all sorts of things. Basically our relationship with cars (at least if you’re a “car person”) is complicated.

And it’s not just car reviews, their long form video essays, like Cash for Clunkers and The Life and Death of Pontiac are absolutely worth a listen/watch.

Why are you talking about this?

A 1979 Ford Fairmont was my first car… and watching that RCR video brought back so many memories… It was 1999. I was living and studying in Los Angeles California. I didn’t mean to buy a Fairmont. To be honest, my original plan was to buy a motorcycle. But when I arrived, I rapidly discovered that Los Angeles is every bit as car-centric as you’ve heard it is. Buying a car seemed much more sociable, as it meant I could take my car-less friends out on adventures. 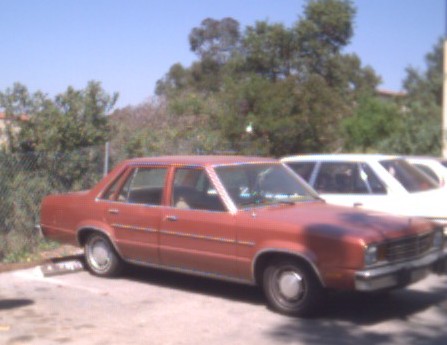 But because it’s me - I didn’t just want to buy a car… that would be boring. I wanted an American car… it’s not like my budget would stretch to a Mustang or something, but I wanted a proper boring American saloon car. The kind of car in the background of every movie. The kind of cars that get smashed up en masse in every episode of the A-Team. I guess, er, a Regular American Car… I actually looked at an amazing wood panel station wagon, but it was out of my budget.

Of course my American friends thought I was insane. They all mostly drove Japanese or European cars.

So I ended up with a Ford Fairmont instead. The best selling car in North America in 1978 - and also a car which features in the 1982 movie E.T. - seriously every police car in that film is a Fairmont… Fairmonts are also interesting (for some values of interesting) as it was the first car to use Ford’s new Fox platform… which later went on to be used for the third and forth generation Ford Mustang - so I almost had a Mustang… but not quite.

A car which Ford wanted to look more European - but to my eyes was very American. Mine had the 3.3 litre straight six engine - linked to a three speed automatic gearbox with a column change. It was like driving a diesel, in that there wasn’t much power, but there was plenty of torque. The car would shift up into top gear at about 25 mph and allowed me to lazily waft around Eagle Rock, Pasadena, West Hollywood and Burbank.

Until I killed it.

I ran the poor thing low on oil. What can I say, it was my first car. I think I managed a partial seizure, as when I took it to a mechanic - they diagnosed poor compression on a couple of the cylinders…

However, I was able to keep driving it. I mean, I had a whole six cylinders to play with… I had to pop the car into neutral at the lights and blip the throttle to keep the engine from dying, but other than that - she just kept on going. I don’t think I’d have trusted the car with any real distance runs - but for bombing around my little bits of Los Angeles she was just fine.

It also made the decision to scrap her a pretty simple one - which ensured I wasn’t stuck trying to sell a car before heading home. The only bits that remain are the licence plates, which I kept as a souvenir. And it’s pretty sunny in California - so amaybe she’s still sitting in a junkyard somewhere…

As for my second car. That I still have… but that’s a whole other story…