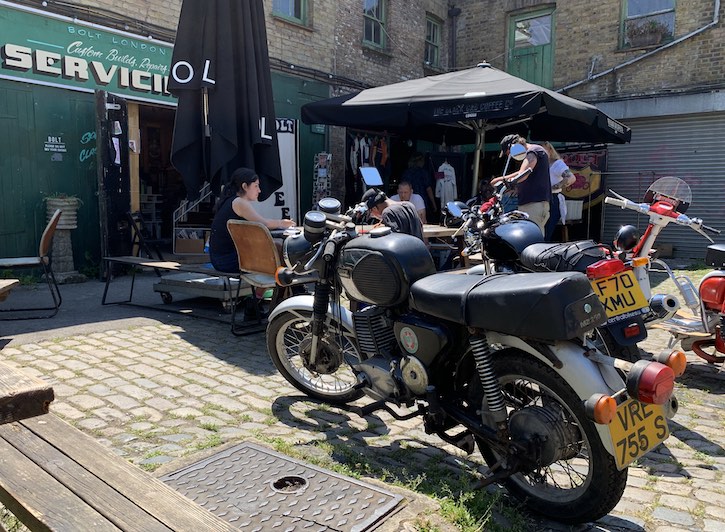 Well, I fixed my puncture (OK - I let the local motorbike shop fix my puncture - but hey, I got the knackered tube out myself at least!) , charged the battery for my total loss electrical system (because I’ve still not fixed it…) and set out for a ride in the sunshine. I had no particular place to go and no real schedule to keep to. And all was fairly wonderful in classic bike land. And then, when I was almost home - stopped at some traffic lights, one of those big Mitsubishi hybrid EV SUV things pulled alongside me.

So I released the throttle, the bike stalled, and I pushed it to the central reservation.

After a few more words about all the pollution my bike was making - the lights changed and he wafted off in a wave of electrically powered smugness.

I hasten to add - he wasn’t aggressive. He just didn’t seem to understand, well, what I was doing on a 43 year old motorcycle in the first place. And why I wouldn’t stop revving the engine.

And it’s put a bit of a dampener on my gorgeous sunny day out on my bike. Am I a selfish monster for riding an old two stroke? Just for fun?

I mean, there are a lot of counter arguments that his giant SUV full of Lithium Ion batteries wasn’t the greenest thing to manufacture in the first place. That as a minicab driver he’s doing 1000s of miles each year, when those journeys could be made on foot, or by public transport, he’s not really saving the planet either.

Or that I barely ride my old polluting bike at all these days.

I guess the best counter argument is that, actually, the pollutant gas that the London mayor is most bothered about is NOx - oxides of nitrogen - and actually the NOx levels for almost any two stroke fall way below the current London ULEZ zone threshold…

But that’s a long conversation to have at one set of red lights, and it feels like it’s not the point. Is he right? Is it irresponsible to keep riding my old bike? Is it selfish? I guess like most human activities, yes it is.

I’m not about to put my Super 5 into the classifieds, or on eBay. And I’m not going to stop riding it on sunny days, whilst it’s still legal to do so.

But this interaction at the lights, in a city where no-one talks to anyone if that can possibly avoid it - has made me think. Think enough to write an blog post at least. So, er thanks, I think - Mitsubishi SUV cab driver man.