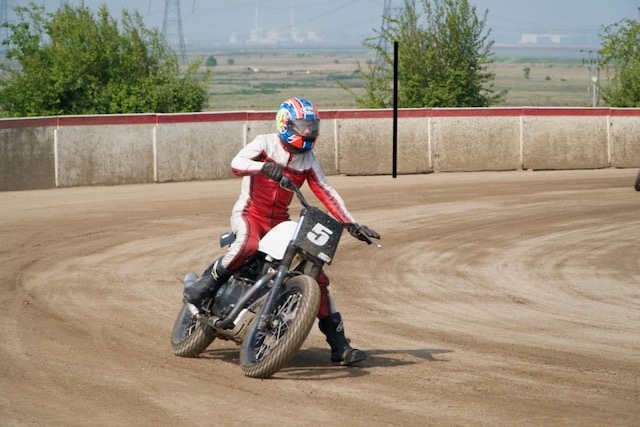 Back at the end of April I had a another exciting motorcycling day out. I’ve been meaning to get something written up for my blog for a while. But as expected, it was a looming MZ Rider’s club magazine with more empty pages than I’d like that pushed me over the edge and made me get something written down. Yes, me and deadlines eh?

Anyway - the magazine is still at the printers, so this is effectively a sneak preview… and it’s also made me publish my very first YouTube Video too…

So you’ll recall I had a day out with Superior Motorcycle experiences… had a wonderful time, didn’t fall off, and was left wanting to do it all over again?

Well how do you top that? Two words. Slide School.

Flat Track, so the blurb goes, is one of the fastest growing motorsports around. Royal Enfield have entered a factory team in the twins class in American Flat track - and have surprised a lot of people with just how competitive their factory bike has been so far.

To further promote the sport of Flat Track racing - Royal Enfield are supporting a global project “Slide School” - as an introduction to Flat Track riding for mere mortals - and I’m sure (they hope) that it may shift a few more Himalayans too.

Working with US based turning firm S&S - there’s a kit for a Himalayan with a louder pipe, single seat unit, giant wide bars and 19” wheels front and rear shod with suitable flat track tyres.

Slide Schools are running in India, the USA and the UK right now - with the UK school run by a company called Dirtcraft.

I’m not going to lie… I get twitchy riding on damp tarmac… so the idea of riding on a dirt oval fills me with terror. I’ve watched the out of control loonacy that is Speedway and I’m not sure I’m cut out for the dirt… but they do say being able to control a sliding motorcycle makes you a better road rider. And it’ll be fun. Right?

In the end I rope in my brother and my friend Mark (who had joined me on my previous Himalayan adventure) for moral support, and so then we couldn’t chicken out.

Dirtcraft run slideschool sessions across the summer all over England. My nearest track was Iwade speedway - deep in the middle of nowhere in Kent. There were no signs, and our welcome email told us to ignore Sat Nav directions lest we end up at a farm rather than the circuit itself.

And even then - we drive into the venue down a dirt track, past a Ford Transit graveyard, and other light industrial post industrial (post apocalyptic) units, before driving past a smaller training oval, and then a big dirt oval. This is Sittingbourne speedway.

This is also where we meet the fleet of modified Himalayans. They look cool. They look mean. I’m still scared.

There are five Himalayans - and 14 brave (or foolhardy) folks have arrived for their day. Including a professional stuntman (!) - and Hugo Wilson, the editor of Bike Magazine. In Hugo’s case, it’s been decided he’ll be racing in the flat track sessions at the upcoming MCN Festival in a few weeks time. So he’s here to learn the ropes.

We get to head into the changing rooms to get kitted up. I’ve got my one-piece race leathers, a gift from my dad because they’d shrunk (translation - he got too fat for them) - and luckily they still fit. I’ve also managed to fit a great big back protector under them as well. I’m wearing my Alpinestar road boots too, but we’re all required to raid Gary’s big box of “slide shoes”

The slide shoe is effectively your third wheel. It’s the additional contact patch to help keep the bike upright and to help you control the slide. It’s also a big lump of metal strapped to your foot. Which means we’ll all be limping around for the rest of the day, our feet crunching into the shale like lopsided cowboys with just one spur…

We’re split up into groups, based broadly on experience levels - but that said we’re all novices today. I’m in group one. We go out onto the track first…

On to the track!

Yes - fine, it’s a wind blasted oval in the back of beyond in Kent. But it’s also absolutely a race track. I’m about to ride on a race track!

I’m not sure if Gary can tell that I’m scared - but we’re told for the first session just to ride around. To get used to the feel of the shoe on the shale and just get comfortable with the bike. And it’s not too bad. I’d convinced myself that damp shale would be like riding on an ice rink (I’ve watched speedway bikes!) - but there’s a deep tread on my tires, and I’m really not going very fast anyway… and before I know it we’re waved back in. Now it’s group two’s turn…

And so it continues. We go out - we come off - and every few sessions the cheerful staff at Iwade Speedway are sent out to spray the track with water again. The conditions are great - it’s warm and sunny… but it’s WINDY. You don’t really notice on the bike - but we’re on flat land by an estuary. There’s no cover, and the wind blasts over the track, rapidly drying it out, and changing where the good lines are…

Every few sessions we get some additional tips from Gary. First it’s body position, where to sit on the bike, and how best to grip the bars. Then we learn about optimum racing lines (top tip - it’s a diamond, slow in and fast out…) and even using the brake…

One of the group has brought a huge professional camera - and he takes lots of photos which he’s good enough to share. These make me look like some kind of racing professional - and are fun to play with in my desktop publishing application…

My friend Mark hands his phone to a fellow attendee - who hops into the middle of the track to capture footage of us riding past, photos and videos. He manages to get a short video of me. I’m “powering” out of a corner, looking horribly slow - but feeling like I’m going fast, and actually getting and catching and controlling a bit of slide as I hit the straight… I’ll take that! And I’ve watched that video over and over and over again.

And before I know it, we’re done. The four hours have flown by. Although I’m knackered and glad to get off the bike. I feel like I’ve just completed a Flat Track CBT session. I’ve learned all the basics required to go racing… although I don’t think I’ve got the required skills to go racing. At least not yet…

Gary rode with us for the final sessions. Which is more than humbling - as he came blasting past us all, making it look as easy as it wasn’t.

I finished the day exhausted but exhilarated… and actually itching to do it again.

If you’d like a go at this - head to www.dirtcraft.co.uk - our four hour session was £185 - and included use of a bike, snacks, time on the track, and of course tuition with national champion Gary Birtwistle.

We went to the MCN Festival in Peterborough about a month later - ostensibly to watch some UK flat track racing, and to cheer on our teacher Gary. I don’t think I’d realised quite what a big deal he is in this sport. He destroyed everyone. In every race. And won first place in two separate classes. No wonder some of my fellow classmates were making such a fuss about learning from Gary!