Oops I fixed it again...

I’m an OK mechanic. Not completely incompetent, mostly perfectly passable. And I write this as I appear to have fixed a slew of things on the Helix, and am mildly cross at the work of a previous bodger…

…thank goodness for Honda build quality. And as I was to discover, cheap Chinese pattern parts.

You’ll recall I’d mentioned that my Helix temperature gauge didn’t work… and that a previous owner had added another aftermarket temperature gauge by drilling cutting a great big hole into the dashboard. Which may have worked at the time, but also (by now at least) didn’t work.

Well, I fixed the original gauge. But not in the way I was expecting to.

The Helix, in common with many scooters, has an automatic choke mechanism. But it’s called an autobystarter for some reason.

I wasn’t entirely convinced that mine was working, so when I stumbled upon a pattern replacement for £10 delivered next day with Amazon Prime I thought why not?

Fitting it was far from simple though. The Helix bodywork is relatively complicated, and you have to remove lots of it to do many basic tasks. Like changing an autobystarter for example.

But I changed it, and started the bike.

Uh oh. The revs rocketed skywards… clearly the old bystarter wasn’t working, and someone had messed with the idle screw to compensate. So I wound that back down.

Time to take the bike for a quick test ride. I couldn’t face refitting the bodywork, so settled for just the seat, and went for a spin around the block on my newly Mad-Max themed urban terror scooter… and things weren’t good… the bike ran fine, and then it didn’t. It had a huge flat spot in the mid range. Tickover was ok, and if you opened the throttle wide open you were ok, but the midrange was non existent. Open the throttle… bike slows and almost goes backwards.

Back to the drawing board.

When I’d first suspected the fuelling wasn’t quite right, with occasional stuttering on a steady throttle, and backfiring on the overrun - I’d found and purchased a brand new Chinese copy of the original carburettor from eBay for £35 delivered. Complete with autobystarter.

Changing a carburettor seemed a bit involved… which is one of the reasons I’d bought another replacement autobystarter, but actually it wasn’t that bad. I set myself a challenge of completing the job in a lunch hour, and succeeded. Turns out a simple single cylinder four stroke is much easier to work on than a multi-cylinder Triumph. 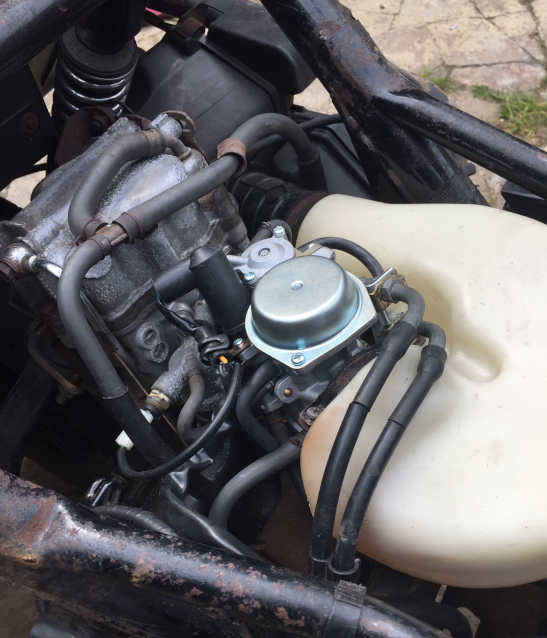 New carb on. All the fuel and vacuum lines reconnected. Cross fingers, and try to start the bike. After a few extra cranks to prime the float bowls, she started right up. The tickover was a little low, so I adjusted it, but other than that, the bike ran fine. Once warned up, the holes in the midrange were gone. No stuttering, no backfiring, nothing…

AND THE TEMPERATURE GAUGE WORKS NOW! 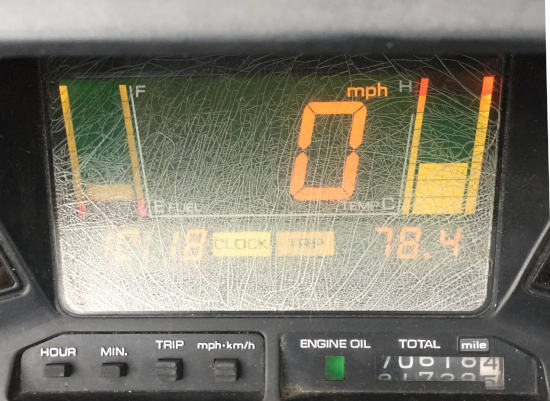 Time for a quick note on how carburettor adjustments work…

Turning a carburettor is as much an art as a science, I think. On most carburettors, the fuelling is controlled by three jets.

Of course I’m oversimplifying, and it’s not something I’m very good at playing with. But really it’s all about getting the relationship between these three jets just right. Oh, plus every repair manual always points out that you shouldn’t think about looking at the carburettor settings until you’re sure your valve clearances and ignition timing is just so.

Rather than fix those issues properly, someone messed around with the available carburettor adjustment, tinkering with the throttle stop screw to change the idle speed, and winding out the pilot screw to weaken the mixture to compensate for it being overly rich when the engine warmed up.

Oh, and bought a cheap nasty aftermarket temperature gauge, and drilled a hole in the dash to fit it.

So when I fixed the choke, all of a sudden the midrange was adjusted waaaay too weak, and I was left with a massive flat spot.

I have a sneaking suspicion that I could readjust the original carb and put it back on, along with my new autobystarter. But adjusting the pilot screw with the carb still on the bike without the right special screwdriver is basically impossible. So I’ll stick with the factory settings on my Chinese carburettor instead, and leave sorting out the original Japanese carb as a rainy day project.

I’ve still not put many miles on the bike since fixing it up - but it’s been transformed with a new carburettor and I’m a very happy bunny.

It still needs a new air filter, and a service… and then it’s time to book it in for an ULEZ emissions test. Fingers crossed she passes and we can ride through central London for free again!