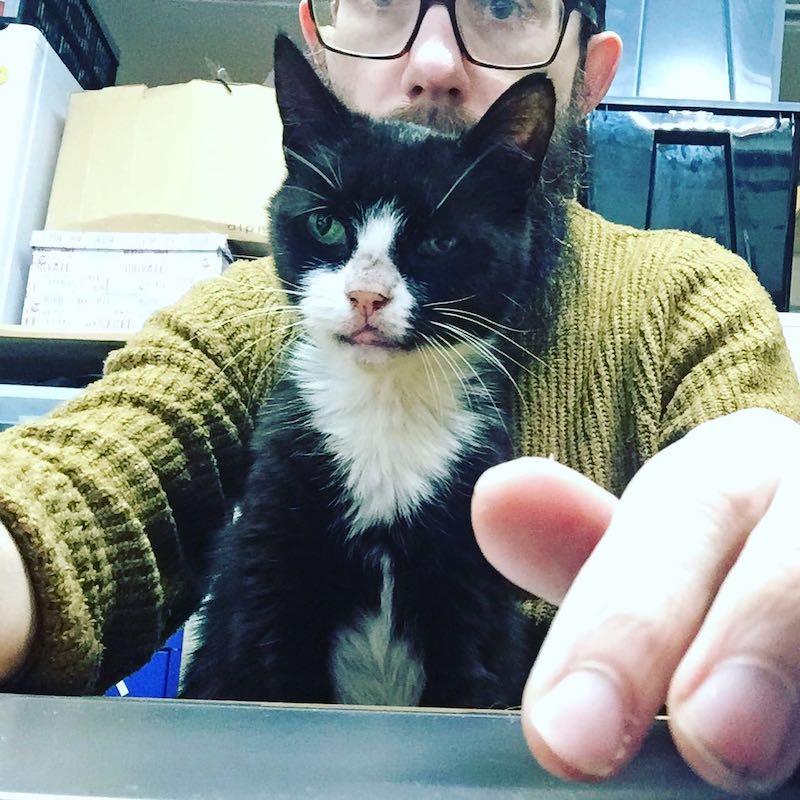 I miss my cat

There’s the “dead cat” theory in politics. If you’re not familiar with it, the idea is you drop a dead cat on a table when you don’t want to discuss a difficult topic, as immediately all conversation becomes about the dead cat and why you’ve just put a dead cat on the table.

It’s a good theory. And as I’ve discovered recently, it’s broadly true. My cat went missing a few weeks ago. And ever since, wondering where she’s got to, what I can do to try to find her, or imagining what might have happened to her has dominated my thoughts, and made me alternately stressed out, sad and angry.

Well, I don’t need to worry about where she is anymore. Her body was found by a neighbour, who took her to the Celia Hammond cat shelter where they were able to scan her identification chip (so there could be no doubt) and then they called my wife. Who called me.

It seems apt that she ended up at Celia Hammond’s shelter on Barking Road E16 - as that’s where we got her from originally, just over ten years ago - in October 2011.

We’d never had a cat before… but I think the decision was driven by my parents - who up to that point had not been cat people - but who were adopted by a cat… who then fell pregnant. We offered to take a kitten or two, but that wasn’t up to us in the end. But we’d decided this is something we wanted to do. So we contacted Celia Hammond, passed the interview that proved we did have outdoor space, and seemed like a safe pair of hands for a cat.

And then we went to the shelter. Originally we wanted “a cat” - then we were told if we were going to be away at work all day, we’d need two, so they could keep each other company. So - “two cats” - and then having met some perfectly wonderful cats, but not being sure if we were allowed to take them home - we were ushered upstairs to an office where some extra special cats lived.

This was a mum, and two kittens - who had to be re-homed together. So far there had been no takers for three cats. But we didn’t know any better as first time cat parents. So two cats became “three cats”.

Although I say “three cats” - we only got to meet two - a pair of “teenage” (rather than little balls of fluff) kittens, a black and white boy, and a tortoiseshell girl… (and of course later I learned that all tortoiseshell cats are girls… but anyway…) we didn’t get to meet the mum. She was sitting on a high shelf keeping away from everyone - we could just about see a nose. And when we agreed, the professional cat wranglers had to go and get her, and chip her for the first time - so I’m sure she was just thrilled about that. To sweeten the deal, we were told we could have mother cat for free, rather than the usual donation they would ask for. And that was that - we were a three cat family now.

Mother cat turned out to be a beautiful little black and white cat, with a pale pink nose, who was christened Jess after Postman Pat’s furry sidekick. Turns out Jess hadn’t been chipped at that point, so not only was she dragged off her high shelf, she was chipped (which involves a big needle) and then popped into a cat carrier for the journey home. You can see why she might not have been very impressed.

Indeed, the kittens quickly adapted to their new life with us, the little tortoiseshell cat - (Tiger) Lily - was soon everyone’s favourite, sitting on my brother’s lap to watch movies, and charming all the neighbours… and it was really tough when she went missing just a few months later… but we never found a body, and consoled ourselves with the fact that she was a friendly little cat who could happily have adopted another family. 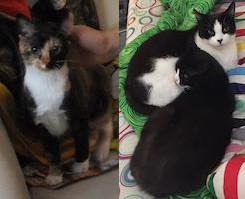 The boy cat, Zarco (named after a French motorcycle racer, who won his first race the day we bought the cats home) was an idiot kitten, who would do things like getting stuck on top of tall bits of furniture. But he grew up into a bit of a monster of a cat. Not fat, just large and lean with big muscles. A gentle giant really, and he and Jess were close. When she wasn’t swinging for him. Zarco was hit by a car on our (usually quiet) street in 2018 - and is buried in our garden.

But this post is about Jess. We’d been told the cats had been found in the vicinity of Leyton Midland Road overground station. Jess was still quite young - the team at the shelter suggested about two years old. My own guess is she was an unwanted pet, who may even have been mistreated as she didn’t like people. Jess didn’t really like anyone, not even other cats. She would flinch and hide from human hands. You couldn’t touch her at all. This made trips to the vets for vaccinations incredibly stressful for all concerned. You had to chase her around the house, heart pounding adrenaline pumping… (for her and for me) grab her by the scruff of the neck and drop her into a cat carrier. This got easier with practice, and also as she got older - but it meant that she would only go to the vet when it was absolutely required.

We learned early on that we could “play” with her using a laser pointer, as like all cats, she was fascinated with chasing that little red dot - but we could do this at a distance and later on we graduated to the king of all cat toys, something fluffy on the end of some elastic. Those would distract her, for a time, but she still didn’t trust people, and remained very much a rescued cat, and not a pet cat.

Indeed, looking back through old photos and social media posts, it really wasn’t until 2016 or so, when she’d start to come to you, and would rub against your legs to try to get food, or ideally a bowl of milk. If you were gentle, and if she didn’t spot your hand, you could just about stroke her, and tickle her behind the ears at this point. But woe betide you if she noticed, as she had a rapid right hook, and some sharp claws. She drew blood from me on a fairly regular basis, much to the delight of my wife.

In 2018 we faced the death of her son Zarco. Returning from holiday, Jess came to greet us (as she usually would at the distinctive sound of our Citroen 2cv) - but no Zarco. He’d been hit by a car - and a neighbour had found him and left his body in the garden with a note. It was a shock to all of us, particularly Jess. Whilst she was quite the grumpy antisocial cat, the two of them were close. It was fairly common to find the two of them curled up together, and she’d even groom him sometimes.

From that point on, she refused to come back into the house. We’d adopted a stray kitten which probably didn’t help. But that was it. I was reduced to feeding my own cat on the doorstep. As at least half a dozen of my neighbours were doing. This was tough for me. It became habit to check on her each morning - shaking my keys or rattling a container of cat food. Then she’d leap out of whatever pile of rubbish she’d slept on the night, and come running. But she wouldn’t come back into the house.

We’d bought a new “smart” cat flap, which would allow different rules for different cats, so the kitten could be kept inside, but Jess would have her freedom. If you’ve ever used one of these, you’ll know the way you add a cat to the flap, is to set it to “learning” mode, then get a cat to walk through the flap. We managed to coax Jess inside - and shut the front door. She instantly made a bolt for the cat flap, and disappeared outside once more. Success!

Far from it. The smart flap logs entry and exit. So now I had evidence that she was just not coming into the house. And winter was coming. It got colder and colder - and to be honest I was contemplating calling the team at Celia Hammond to come and get her. At this point she’d gone back to being a stray - and I just didn’t feel we were looking after her properly. And then - my little Christmas miracle. Late on Christmas Day 2018 she came into the house. She inspected every room, and then curled up to sleep next to our bed. From then on she’d be inside most days. But when spring arrived, with warmer weather and longer days - she’d go back to being a street cat, scrounging from the neighbours and sitting on bins in the sunshine.

In 2020 - whilst sitting on a bin, she was spied by prolific London blogger Diamond Geezer. He added her to his post about Maryland, and she was very popular with his readers. I know I did a double take reading his post that morning…

In early 2021 there was a complete change in behaviour. After just under ten years with us, the street cat became a pet cat became a lap cat. She started sitting on my lap. All the time. Whilst working from home, whilst sitting on the sofa, even during meals. She was my furry shadow. She would also go through phases of sleeping on me every night. You’d have to physically pick her up and put her outside of our room. And then she’d return minutes later, unless you locked her out. Not to mention her grooming me! Licking at my arms or my jumper with a sandpaper tongue!

And this had become our new normal. And most of the time it was great to have her company. Even if I couldn’t really understand why. The only plausible theory was I’d brought the wrong cat home from a trip to the vet.

And I couldn’t imagine this ever changing. She was a tough old street cat, a survivor who could look after herself. And then on Sunday the 16th of January at about 10 am, she wandered out the catflap. And didn’t come back.

For the next week or so, I pounded nearby streets, shaking keys in the hope she’d come running. We asked for help on our local Facebook group - where one person had a suspected sighting over in the Olympic village. But the weather had been bitterly cold, and as days turned into weeks, turned into almost a month, I’d lost hope to be honest.

And then a neighbour found a body. Which is where I began this post I suppose.

She was a beautiful little cat, grumpy, stubborn, frequently infuriating…

…and I can’t believe how much I’m missing her. But I’m taking solace in some really lovely posts on Facebook from the neighbours. She had plenty of fans on Albert Square. 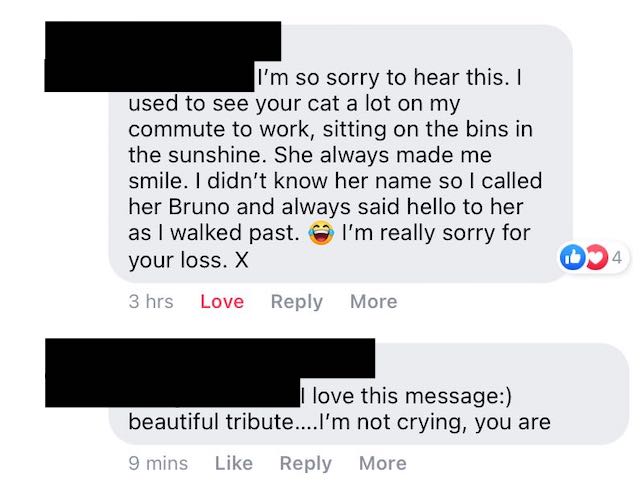 It’ll take me a long time to stop looking for her on the street each time I open the front door.

But I’m really glad she came to live with us, the street cat turned rescue cat turned (eventually) into pet cat.