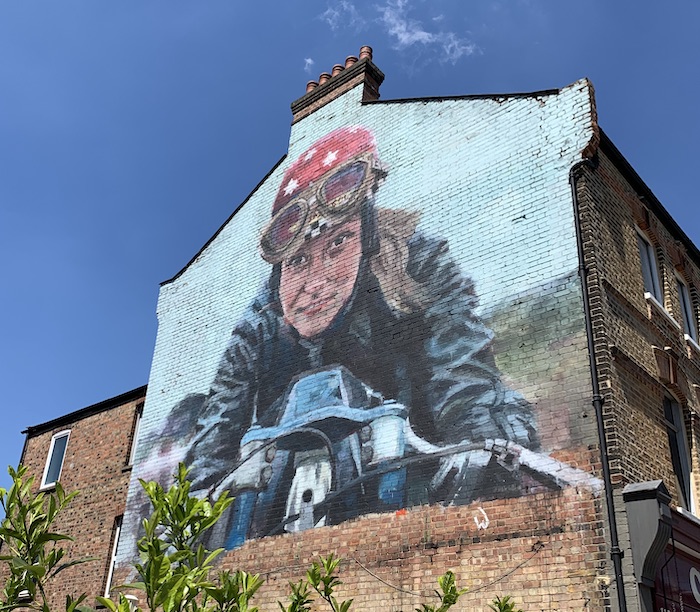 This was originally an article for the July/August edition of MZ Rider - the magazine I edit for the MZ Riders Club - but as it involved:

I decided it would be nice to rework it into a blog post. It’s also nice, as a blog post allows for links, and embedded video - making things slightly more interesting than a static article in a magazine.

I have a regular contributor to the magazine, who sends me tales of small time adventures, riding the back roads in search of memorials to local heroes. What London may lack in picturesque biking roads, it surely makes up for in raw history. So I decided to go in search of a local hero of my own.

From my home in Albert Square it’s onto Forest Lane, a road which follows the line of the adjacent railway. It’s about a mile long and straight as an arrow, like it was designed for boy racers. At which point it’s now covered in very grumpy and lumpy speed bumps.

On the left hand side housing. And on the right the sort of grim concrete wall that would work perfectly in the eastern bloc.

The road stops following the railway at Forest Gate. Ah, sleepy Forest Gate, a forgotten east London suburb on a tired railway line into London. A line that’s being upgraded to Crossrail… (oh - sorry, I mean the Elizabeth Line of course) which means all of a sudden half the high street has been demolished and up are going more of the identical brick clad flats that you see all over London.

Forest Gate (as the name might suggest) is the beginning of Epping Forest, a huge chunk of greenery owned by the corporation of London. As we leave Newham and enter the neighbouring borough of Redbridge, we hit the very beginnings of the forest at Wanstead Flats. At this point the speed limit jumps up to 40mph, for no obvious reason, and it’s why a lap of the flats is my favourite car/bike testing ground if I’ve been tinkering with something.

A few years back, in that crazy summer when it was crazy hot, a chunk of the flats burst into flames…

…it was still burned out months later. But now you’d be hard pressed to know where the fire happened. I remember at the time, in the wake of the Grenfell tower disaster, news outlets were at pains to point out, it’s green space called Wanstead flats, and not a block of flats in Wanstead…

From Wanstead Flats we’re now in Wanstead proper and the difference from down at heel Newham is startling. It’s all giant houses with giant driveways. Peak suburban London, and all we had to do was traverse a mile or less of greenery.

From Wanstead we head left, through a bit more forest before we find ourselves at the top of Leytonstone High road. Yup, the whole bit through the flats is a bit of a detour really, as Leytonstone high road is the obvious route as the crow flies.

Or it would be if it didn’t have a confusing one way system and cycle lanes that make it hard to filter to the front. It’s ironic that Leytonstone High Road doesn’t lend itself to motorcycling, as back in the 1970s, when my Super 5 was still a common sight on the roads, there were a number of bike shops there, including Hagon, Draganfly and more…

At the big roundabout with the A12, we head for Whipps Cross road. Greenery on our right… and the large imposing Albert Hitchcock Hotel on our left. Albert is one of the borough’s famous sons, born in Leyton in 1899. There’s a heritage plaque on a tired Jet Filling station on Leytonstone High Road, built on the site of Hitch’s childhood home. Oh - and the next building is decorated with bird murals… it took a long time for the penny to drop that the murals related to his 1963 film “The Birds” - and I’d driven and cycled past dozens of times.

There’s a pub named after that film on Leytonstone high street - that we’ve skipped - and there are some really rather excellent mosaics at the Leytonstone tube station, showing scenes from a number of his more famous films.

But today’s adventure isn’t about him. Nope, on this adventure he’s merely a macguffin. He’s a master of suspense, and I’m trying to do the same.

And then we head into Walthamstow. This is more like the east London I know. A little rough around the edges and lived in, compared to Wanstead’s Essex mansions.

I used to attend banjo classes in Walthamstow, and thought I knew the place fairly well, but today I’m approaching it from a new direction, relying on the voices in my head.

No really, I recently added a Bluetooth headset to my crash helmet, and can ask my phone to find a place and the voices (and pointers on my Apple Watch) can help guide me. It works surprisingly well, and helps me a lot, as I really have no sense of direction, navigating as I do on memory of routes. Which is fine on the routes I know, but when I’m adventuring…

A left and a right and we’re on Wood Street, E17. An art collective, Wood Street Walls - have, in recent years, put Walthamstow on the street art map - funding a number of murals across Walthamstow and Waltham Forest. And this may provide a clue as to what I’ve come to look for today.

Past Wood Street station… onwards towards the Duke pub… and there it is. On the left. Quite literally the size of a house - a mural of pioneering motorcycle racer, Beryl Swain.

The mural, by artist Helen Bur, was painted back in 2019. In fact, there’s a fantastic video of the artist at work here:

But who was Beryl Swain?

Beryl was born in a house near Wood Street, Walthamstow in 1936. In 1958 she married motorcycle racer and bike shop owner Eddie Swain. It was Eddie who provided her first bike - a 98cc Moto Guzzi - and Beryl was hooked - moving to a Maserati Tipo 50cc road bike, and a racing Itom 50cc - both of which were kept under the stairs of their Walthamstow home when they weren’t being used…

Check her out in the “Racing Housewife” Pathe newsreel from 1962…

The racing housewife line was a bit of journalistic spin - Beryl’s day job was as a commercial secretary in the city - a prestigious and well paid job… which is handy, as racing motorcycles is expensive and Beryl was an entirely self-funded privateer.

She raced across the UK as a member of the Racing 50 Motorcycle Club achieving numerous top ten finishes… yet she was always expected to start from the back of the grid. As she said at the time “I presume because I am a woman I must be lucky that I am allowed to race at all!”

And then in 1962 a 50cc class was introduced at the Isle of Man TT. Beryl knew she had to take part in this inaugural event. It wasn’t going to be easy. Motorcycle racing’s global governing body the FIM wasn’t thrilled that a woman was planning to race at one of the most dangerous road racing circuits in the world… but weren’t initially prepared to prevent her from taking part…

…instead, they decided on a minimum weight requirement for the rider - 9 stone 6 pounds.

But only in the 50cc class…

Undeterred, Beryl went on a crash weight gain diet - eating cake, chocolate, bread, potatoes and malt extract laced with cod liver oil. This brought her close to the new minimum weight - and as such she was allowed to wear lead divers weights as ballast to get her to the weight requirement, so she’d be allowed to race.

And so race day arrived. Riding her privateer Itom against far better funded and prepared factory teams - Beryl screamed onto the 37 mile mountain circuit on her tiny hand-painted Itom 50cc with a point to prove…

…and prove it she did. Despite losing top gear on her second lap, she brought her bike home in 22nd place, just a second adrift from 21st placed finisher John Lawley on a similar 50cc Itom. Finishing the TT is an achievement in itself. 33 bikes had started that morning, and only 25 were to finish.

And who won the inaugural 50cc Ultra Lightweight TT event? An East German called Ernst Degner, on a two stroke Suzuki, that probably bore a striking resemblance to a racing MZ. Yes, that Ernst Degner - who shocked the motorcycle racing world in 1961 when he defected to the west during the 1961 Swedish Grand Prix - disappearing off to Suzuki with the blueprints of MZ race technology stuffed into his leathers.

It’s a fantastic story worthy of a whole book on the subject. Luckily there is one - race journalist Mat Oxley’s “Stealing Speed” - if you’ve not read it, go and find a copy - I suspect you’ll enjoy it.

Beryl was understandably delighted with her achievement - but as with all racers, it’s never enough. She was already planning a return to the island for the 1963 Ultra Lightweight race, on something faster and more reliable… when in October 1962, the FIM cancelled her international race licence, without warning, and without a valid reason.

Well - their reasoning was simply that it wouldn’t be a good look for the sport if a woman were to die road racing, and so that was that. Her eloquent appeals to the FIM fell on deaf ears. It wouldn’t be until 1978 that a woman was allowed to compete in the TT again - when Hillary Musson entered the 250cc class. The ban on women racing in the Manx Grand Prix wouldn’t be lifted until 1989.

Disheartened, Beryl turned her hand to speedway for a time, racing at Hackney Wick speedway - but riding on shale just wasn’t her style, and she retired from motorsport for good in 1964.

Coming to find this mural has been on my London todo list for a while. And I’ve really enjoyed learning more about Beryl and her fantastic achievements. I was also pleasantly surprised to discover a link to Ernst Degner and by extension to MZ motorcycles - only after I’d gone out on my ride to find the mural, and was doing my homework afterwards!

This mural (and by extension Beryl herself) first appeared on my radar, due to a number of social media posts by all female motorcycle club VC London. They organised a ride out for what was I guess an unofficial unveiling in June 2019 - and I’ve been meaning to go and find the mural in person ever since. (Yes - it’s on Google Street view too - but that’s not as good as the real thing!)

My article has leaned heavily on the excellent work of Kirstin Sibley and Rachel Gomes - who curated an exhibit at the Vestry House museum in Walthamstow - and produced an excellent accompanying magazine to go with it.